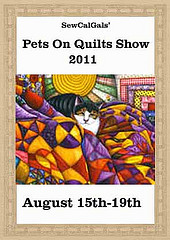 Darlene over at SewCalGal is hosting the 2nd Annual Pets On Quilts Show  that runs from Aug 15 - Aug 19th!  If you have photos of your pets lying on your quilts, quilts that you have made with a pet theme, or Electric Quilt Designs in the pet theme then this show is for you!! Art Quilters are also welcomed!

My entry for the show is of a quilt that I made for my husband for Christmas 2003!  It is of his beloved Benitta who was bought from a breeder in the southern part of NC in December 1982!  She was originally bought for his brother but Benitta took up with Butch immediately and she fast became known as "HIS" dog. 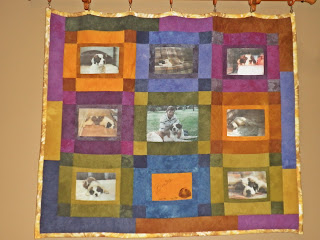 My husband has been a tobacco farmer for over 30 years and Benitta would walk up and down the rows while he cultivated with the tractor and when she tired she would go lie down under the shed until he was finished.... or go to the house and beg inside where it was cool.  She was a house dog..YES! even as large as she was...

She slept on the bed with my husband every single night!  He said she would lie on her back with all 4 legs stretched out at times and these nights he did not get much sleep.  But he did not mind.  Her usual style of sleeping was on her side but even with that, she took up a lot of the full size bed but hubby made the best of it.... He is just tenderhearted like that!  He would never be mean to an animal... especially his Benitta!

During the day if she wasn't outside with my hubby, she liked to lay on her back in the hall just outside his room.  The floor was always cool and she loved it! 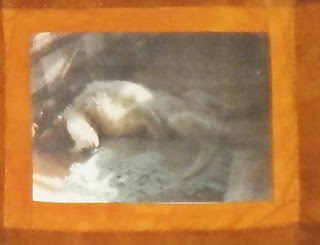 And if he stopped at the store for a chocolate bar, well... she had to have hers too or he didn't get to eat very much of his!  And the Frosty Maid was her favorite place to go! She was always ready for her ice cream cone! He spoiled her rotten and she loved it!

By July 1995, Benitta had arthritis really bad in her hips and back and it was all she could do to walk.  My hubby would help her walk a lot of times but it got to the point that he knew what he had to do.  Although it broke his heart in to a million pieces, he had her put down.  She now lies in his mother's front yard with beautiful azaleas surrounding her grave.  He still cries for Benitta... there will never be another one like her! 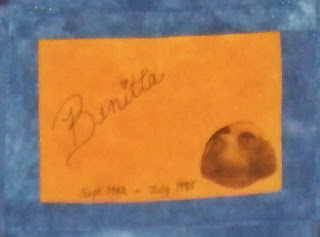 If you would love to feature your beloved pet, all you need to do is write up a story about them and head over to Darlene's and link up to the Pets On Quilt Show!

And any quilt show is not complete without prizes! Some of the fabulous sponsors are: Fat Quarter Shop! -  The Raspberry Rabbits! -  Jane's Fabrics! - The Quilted Kitty! - Fabric.com! - InchWorm Fabrics! and many more fabulous sponsors!!  Head on over to Darlene's and check out all of the sponsors!

Darlene is also collecting photos for a calendar that will benefit the Humane Society!  If you have a photo that you would like to see in the calendar contact Darlene!

So what are you doing sitting in front of the pc! Scoot on to your sewing rooms or grab those cameras and get something ready so you can join in on the fun!

Thanks for the great shout out Thearica.

That's a lovely story, thanks for sharing the quilt and a special dog.

Sounds like Benitta was a great gal! What a lovely memory quilt :)

Awwwhh such a sweetie she was. My DH had to do this for his Sadie Last year. Very pretty memory quilt!

Such a sweet memory quilt for a special friend.

Thanks for sharing those wonderful memories of such a beloved friend.

Beautiful story Thearica, and a wonderful memory quilt for your husband.

What a beautiful story! Your husband must really treasure this very special quilt.

Ahhh. that is a wonderful memory quilt! Lucky husband!

What a special dog, and a great quilt to remember her by!

What a great memory quilt for your DH. I'm sure he loved it.

Wonderful story and what a wonderful thing to do for your husband. I'm sure he treasures that quilt. I've been thinking of making something like that for my daughter. You just may have given me the push I need.

Wanted to come back and say thank you for sharing your story about Benita. Wonderful four legged friend. And a beautiful memory quilt too. Very special.

what a wonderful Memory quilt..

What wonderful memories you shared. Thank you.

What a wonderful friend.

Benitta sounds like a great dog and I love your quilt. I hope you win a prize.

That's a wonderful story about true love! How sweet - and a beautiful quilt - he must be thrilled.

What a beautiful dog tale! And your memory quilt is beautiful too.

Maybe even only once in a lifetime do you befriend a dog or cat like that. I loved the story...melts my heart!

What a wonderful quilt. I loved the story behind it.

Your quilt of Benitta is a treasure. It is beautiful, and I love the design.

What a wonderful story and a great quilt.

Your story got me all teary!! Thanks for sharing...and love your memory quilt!!
P

I am using grandpa's email
heather

Thanks for sharing a wonderful quilt and dog! Your hubby sounds like a kind man.How wonderful to have a memory quilt of Bettina. Take care!

Aw, I teared up reading this...

That's so sweet! Love the story, and I bet that is a treasured quilt!

Ahhh, you brought tears to my eyes. Made me think of my husband and his beloved "Dawg". :(

Thanks for sharing your story. The quilt is a wonderful treasure for your hubby.

Beatiful and sweet memory quilt for a special friend!

Oh what a darlin' from time to time I have wondered what would become of my DH if anything happened to his beloved Tiny.

Such a wonderful story! It's great that you made this special quilt for your husband.

She must have been a very very special dog. That is a beautiful story and we thank you for sharing it.

Aww she sounds wonderful! I think the quilt is wonderful too. I think I sould make one for my husband and his dog. Thanks for the great idea and telling us about her.

What a beautiful post. I had an airedale that was my constant companion for 10 years. When she went down, we had to put her to sleep. It was the hardest thing I've ever had to do. I just have never been able to get attached to another pet since. Thanks for sharing your hubbys story.

Beautiful quilt and a beautiful story. All our pets leave us too soon so it is hard to have a happy ending to our pet stories. thanks for sharing.

What a lovely way to remember such a special friend! Thank you so much for sharing the story of Benitta and your husband :)

What a heartbreaking, heartwarming story! Thanks for sharing.

Such a great story although sad at the end. It sound like your husband had a great friend.

Your memory quilt is a great tribute to a fine friend.

Dogs aren't are whole lives, but they do make our lives whole, don't they? Wonderful quilt!

What an amazing story of a man and his dog!

what a wonderful story... thank you :)

What a great memory and way to treasure an amazing friend!

How beautiful. Thank you for sharing.