A Birthday and Albino Roosters


Today is my birthday!!!  Happy Birthday to me!  My hubby surprised me with these beautiful roses yesterday!  A day early... hmmm... Now how can he top that today on my actual birthday? :) 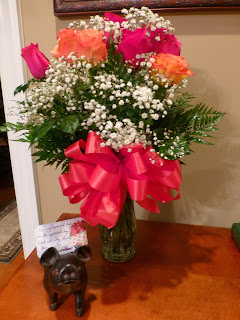 This is a wallhanging that I made with the Radical Rooster patterns.  I just love the look of these  albino roosters... and they turned out really awesome all done up in white on white fabrics! 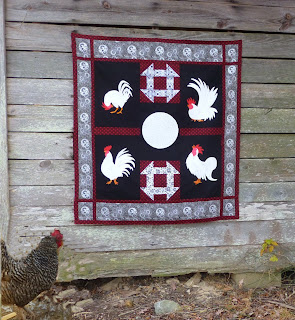 I wanted to put them on black fabric to really show off the albino part of my idea and I added a moon to add to the illusion of it being nighttime.  The border fabric came from JoAnns and is perfect for this quilt with its silvery irridescent moons!  I fussy cut the fabric so the moons surround the quilt evenly. Perfect finishing touch!

I took my quilt to a neighbors who had a chicken coop to get photos but the photos did not turn out so when we got home, hubby put the quilt on the side of our corn crib.  I cropped a rooster out of the other photo and transplanted him on to my photo. :)

I am in a quandry as to what to name the quilt.. I like Moonlight Serenade but I also like Moonlighting In The Barnyard.  Which one do you like best?... or do you have any other ideas for a name?  Any and all ideas will be welcomed! 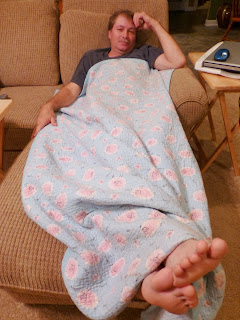 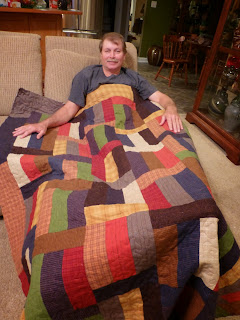 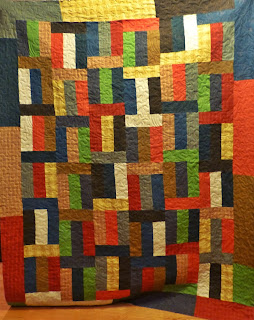 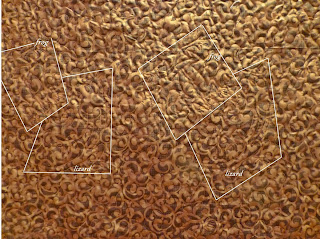 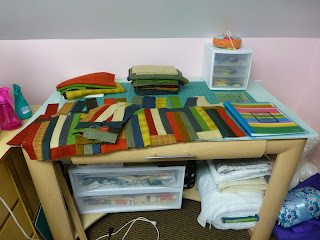 I am ready to mail the Love Is Wicked and the Our Wicked Family Tree off to their new owners come Tuesday morning.  (Monday is no mail - holiday).  I had a lot of fun quilting these 2 little quilts.  Hubby liked the family tree so well, he wanted me to keep it.  i told him too bad... it was already promised. :)  He didn't actually really like the cats... because we don't decorate for any holidays... he just loved the quilting... So I told him I would quilt another wallhanging that had a lot of background to it and do the same kind of quilting on it.  I think that made him happy. :)

So here goes... I love the texture...Enjoy the picks.. 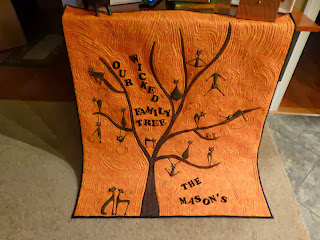 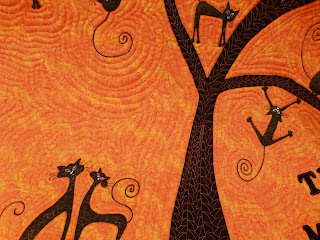 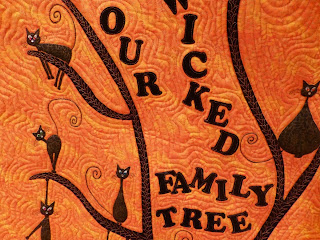 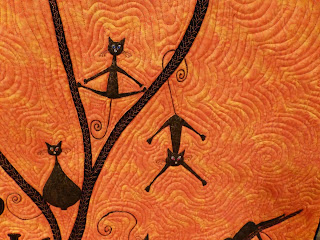 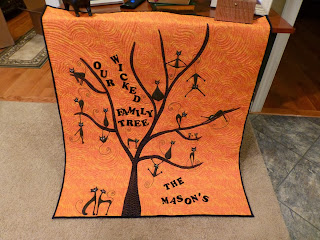 I did the blanket stitch applique once this mini quilt was loaded... and how cool are their tails! 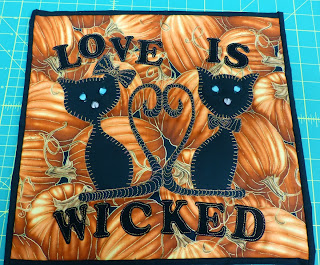 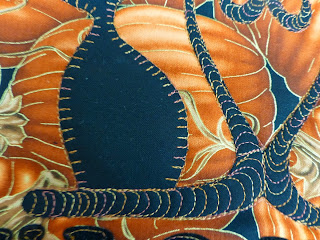 Creating Smiles ~~ One Child ~~ One Quilt At A Time!

How do you make a child smile?  Present them with a quilt!

Many of the ladies from the  HGTV Quilting and Needlework Forum participate in sending fabrics, quilt blocks, quilt tops, finished quilts and funds to help see that the children at the Masonic Home and the children of the Central Children's Home, both here in Oxford, NC, are presented quilts from time to time.  I have also had a few bloggers send in to help with this project as well.

My friend Marie and I were able to get an appointment for today and we presented 5 quilts to some fine young men and 4 quilts to some beaming young ladies.

We are now down to 1 finished and ready to go quilt in the charity closet and it is a baby quilt. I take the baby quilts in to town with me when I go for groceries and I have seen women bring babies out of cars with hardly any coat on in the really cold temps. I walk up to them and ask if they have a quilt for their little one and when they say no, I ask them if they would like one. You can tell by their facial expression, just how much they appreciate these quilts.

They are in awe when I tell them about our group and how the quilt came to be. These quilts have stories to tell and the story only continues when the recipient knows where they have come from. Can you imagine the chatter between these mothers and their friends when they show the quilt they received from perfect strangers.

Here are the photos from today's presentation.  Faces are hid due to privacy laws. 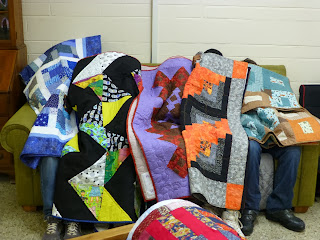 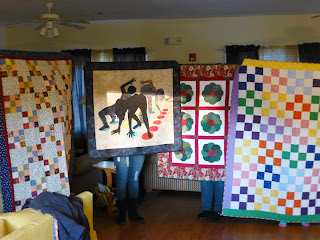