I started a blog group with 12 other women and we call ourselves The Bakers Dozen.  The group was formed after I happened upon this blog and was so inspired, I decided to start a group similar to it:  Twelve x Twelve

Every 6 weeks we have a challenge theme and we all interpret it the way we choose.  Your interpretation does not have to be in quilt form but if it is, the quilt should be 12 x 12.

The theme for the past 6 weeks has been Baubles, Bangles and Beads.

I immediately copied and pasted the theme into a google search and found that the theme was actually a song back in the late 50"s!  I went into Amazon.com and searched for the CD and found it.  Got it ordered and waited patiently until it came...

I had to piece my background out of black and white fabrics because the band members are in tuxedos.....I think this block pops!

I sewed on 160 beads by hand and  didnt count the beads on the fringe... :) ... I had a doll with earrings so I stole them away from her so I could put a Bauble on my block...the Bangle is defined by the CD itself...with the exception of the center being thinner than any bangle I have ever seen... I printed the words to the song on  printer fabric sheet and cut it out in sections and attached it to the block...The band members names are on the right hand side of the block in the white fabric... The names were so small that I wrote them on with a fabric pen...I still have a long ways to go in embrodiering anything that tiny....It would have been a lot better done in embrodiery ....

And this is my interpretation of Baubles, Bangles and Beads!! 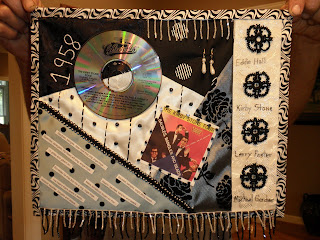 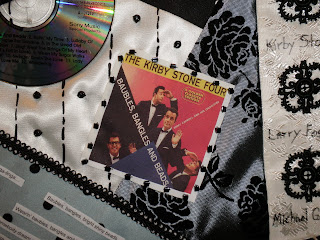 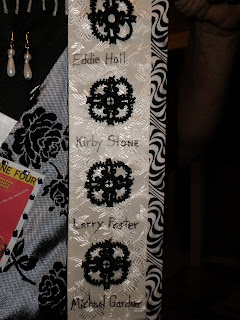 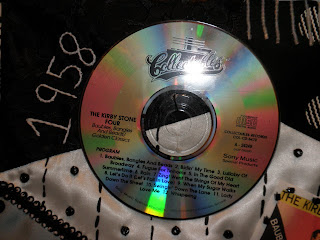 omg....i love your quilt! what an interesting process..so much talent.

Love it.. So creative.. Lots of beads, were they hard to sew on?
Maggey