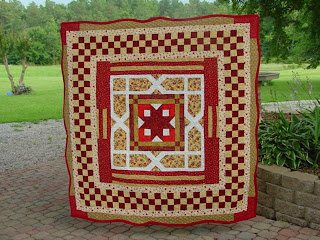 I love the world of blogging. It shows the kindness and generocity in the world. This is such a neat gift with all the different hands that have touched it. I am sure that this will be treasured. Thankds for sharing the story!

This is a beautiful quilt and has such a nice story behind it...hope she will have a fun trip to the Netherlands.

Thearica, that is such a nice gift with a great story to tell. If your look up kindness and generosity in the dictionary, I bet there is a picture of you.

You are so generous. This quilt will be cherished and cuddled for a long, long time!

What a sweet thing to do and a lovely story. How fun to talk to her all the way from the Netherlands...hugs, Linda

what a very generous and thoughtful gift.... just like you T ;) I'll have to visit the blog you listed so maybe I can read about the excitement when her daughter receives it ;) what a grreat way to make a little girl feel so very special. :)

I am visiting from Raine's blog what a genorous and talented lady you are. I am enjoying reading your blog.